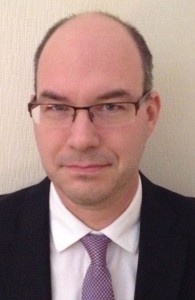 Aaron John Gulyas was born in Indiana in 1975. Raised on toy-themed cartoons, game shows, and Star Trek reruns he has, nonetheless, achieved some sort of success in his life.

Gulyas received his BA in History from Hanover College in 1998 and promptly went to work for the state of Indiana assessing disability insurance claims. Wearing out his welcome in the civil service within a year or so, he shifted to the thrilling world of proofreading. Realizing he was only really good at history, he returned to school and was awarded an MA in United States History from Indiana University-Indianapolis in 2003. He then moved into teaching, eventually landing at Mott Community College, where he has taught since 2006.

Gulyas has presented numerous scholarly papers at conferences for various organizations, including the American Culture Association, the Popular Culture Association, and the Educational Technology Organization of Michigan. He has contributed to numerous history education and popular cultural resources. His first book, Extraterrestrials and the American Zeitgeist: Alien Contact Tales since the 1950s, was published by McFarland in 2013. He also contributed a chapter to Doctor Who in Time and Space:  Essays on Themes, Characters, History and Fandom, 1963-2012, about the ways in which fan expectations shaped the 1996 and 2005 revivals of the classic science fiction series.

His website is History, Teaching and the Strange, and he is on Twitter as @firkon.  He lives near Flint, Michigan, with his wife and son.